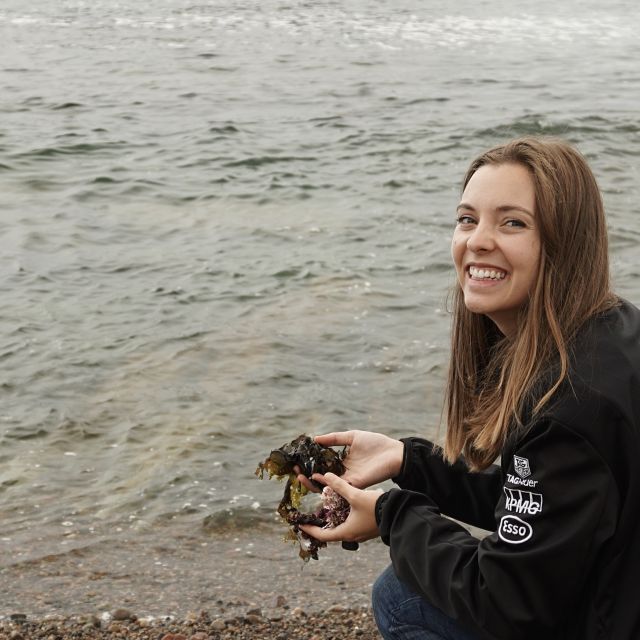 Mae Rennick received her Bachelor of Science in Biology from San Diego State University in 2017. Following graduation, Mae assisted and led a number of projects spanning the coastline of Southern California, and gained an appreciation for the researchers involved in protecting such an invaluable resource through research and the collection of long-term data sets. In 2018, She earned her AAUS dive certification and headed north to work as a research diver for the Raimondi-Carr Lab at the University of California, Santa Cruz, where she was able to participate in work analyzing the trophic interactions of otters, urchins and kelp in Monterey Bay. Following this line of research, Mae joined the Ocean Recoveries Lab at the University of Santa Barbara, California under the direction of Dr. Adrian Stier, where she continued her investigation of the role of sea urchins in kelp forest ecosystems. Through this work, she marveled at the importance and versatility of algae, its significance to humans and its associated ecosystem functions. Mae then teamed up with the Santa Barbara LTER to assist in the setup, harvest and processing of an offshore kelp farm which ignited her interest in aquaculture and food production. Mae has since joined the lab of Dr. Halley Froehlich in the department of Ecology and Evolutionary Marine Biology at the University of Santa Barbara, California where she will be studying the interconnectedness of aquaculture and fisheries in addition to the role of marine aquaculture in developing sustainable long-term food security systems and initiatives.

Through her work, Mae continues to prioritize the involvement of young females in science through activism, outreach and her roles in education, first as a science instructor at the Ocean Institute, later as a Kindergarten teacher at Hollister Elementary School, and in her next chapter as a graduate student.

In her own words, “I am very excited to be ofFISHally joining the Froehlich Lab to contribute my ideas, learning, and bad puns to the world of aquaculture and fisheries science!”